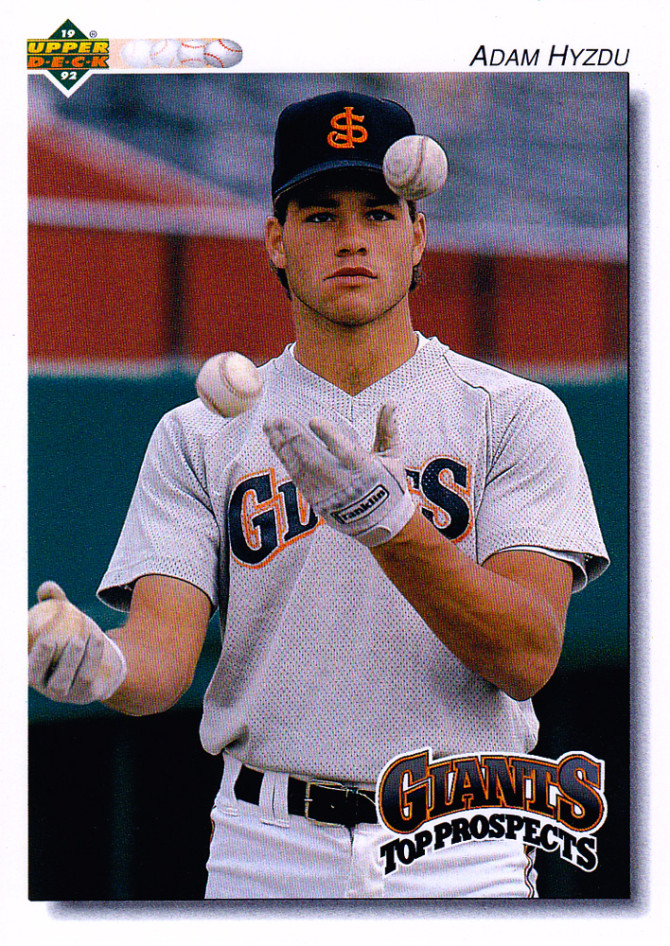 If you are a 50-year-old sports photographer who grew up in the United States and works in this country you went through two golden eras of baseball cards. The first era was in the 1970’s when many of us collected Topps baseball cards. For me it meant almost daily trips to the local 7-11 on my bike to get a 25¢ Slurpee in a plastic baseball cup in 1973 and 1974 (usually a cherry and cola mix) and bunch of wax packs of Topps cards that cost 10¢ for a pack of 10 cards. A Slurpee and a stack of Topps cards and the rest of my day was set. Those were some great days growing up in Fremont, California waiting for that night’s San Francisco Giants game to come on over the airwaves from radio station KSFO 560 on my red Panasonic transistor radio.

Fast forward 20 or so years and many of those same kids who grew up collecting cards were now sports photographers shooting pictures for the same type of baseball cards they collected when they were kids. But in the early 1990’s Topps wasn’t the only game in town. The market was overrun by so many companies it is hard for me to count, let alone remember them all. Besides Topps there was Fleer, Classic, Leaf, Donruss, Pinnacle, Sportsflics, Score, and Upper Deck. This was the golden era be a baseball card photographer. There were multiple card companies handing out day rates by the truckload. Photographers I knew were shooting 40 days of spring training and traveling all over the country shooting baseball during the regular season. There was cash everywhere, with no end in sight. The money was good. Go to the ballpark, shoot your Fujichrome, and ship the raw film to your editor. That was it. Just as long as you stuck to the list and did a good job the assignments kept coming. It was awesome.

I was never one of the guys who experienced the glory days of card photography. I was still trying to be a newspaper photographer then the business started going strong in the late 1980’s and all the companies were loaded with crazy talented shooters by the time I tried to get in the game in 1992. The one place that gave me a chance was The Lovero Group in Orange, California. Owned and operated by legendary photographer V.J. Lovero, his company was the official vendor for all of the photography used on Upper Deck trading cards. I had known V.J. for a few years ago and he was kind enough to give me a chance by assigning me to shoot for the new minor league baseball set Upper Deck was producing in 1992. Since most of his main crew of great shooters were busy shooting the big leagues that summer he needed some extra guys to shoot minor league stars in their local areas. For me that meant shooting top prospects in the California League, which is High-A ball. My closest team was the San Jose Giants (still is) and they played about 30 minutes away in a wonderful old ballpark, San Jose Municipal Stadium. San Jose Muni was a WPA project that opened in 1942 and was a great place to shoot. I ended up shooting games that summer on assignment for The Lovero Group in San Jose, Stockton (Ports), Visalia (Oaks), and even Calgary (Cannons). It was the first time I had ever been out of the country! That summer I worked with Lovero Group picture editor Peter Brouillet. It was Peter who worked extensively with me and really helped me shoot better that summer. I will never forget that.

One of the big-time prospects on my list to shoot was Adam Hyzdu, the San Francisco Giants first round pick (15th overall) in the 1990 amateur draft out of Moeller High School in Cincinnati. Hyzdu was a right-handed hitting outfielder who broke many of Ken Griffey Jr.’s records at Moeller High and was one of those can’t miss prospects. Unfortunately his career never got going in the Giants system and he eventually bounced around to several clubs before retiring with the Texas Rangers in 2006 at age 34.

Let’s take a look at some of my favorite pictures of this young kid when he had a bright future in front of him in San Jose back in the summer of 1992. He was 20 years old and I was having a blast shooting him at Muni where they played 5pm games on Saturday’s and the light was incredible. I only had a 300mm 2.8 lens then (I got my 400mm 2.8 lens the following year) but it was all I needed to work around this intimate park and make pretty pictures with a pocket full of Fujichrome. Of course everything starts with the picture Upper Deck chose for the front of Hyzdu’s card (above). This was classic Upper Deck and I loved it. The kid juggling three baseballs during batting practice. As a photographer you need to get there early to make this picture, but on the other side you need a great editor to pick a picture like this. Back in the day Upper Deck was so good at this!

Adam Hyzdu of the San Jose Giants watches batting practice before a game at Municipal Stadium in San Jose, California in 1992. (Photo by Brad Mangin)

Adam Hyzdu of the San Jose Giants bats during a game at Municipal Stadium in San Jose, California in 1992. (Photo by Brad Mangin)

Adam Hyzdu of the San Jose Giants bats during a game at Municipal Stadium in San Jose, California in 1992. (Photo by Brad Mangin)

Adam Hyzdu of the San Jose Giants sits in the dugout before a game at Municipal Stadium in San Jose, California in 1992. (Photo by Brad Mangin)

Adam Hyzdu of the Pittsburgh Pirates bats during a game against the San Francisco Giants at Pacific Bell Park in San Francisco, California in 2002. (Photo by Brad Mangin)

I had an incredible time photographing Hyzdu and so many other minor league kids way back in that summer of 1992. I hope to tell some of their stories and look back at some of my other favorite cards of mine for the golden age of baseball cards in future blog posts. The golden era of card shooting was great while it lasted. It has been gone for a long time now. So long that it is mostly forgotten.

What Others Are Saying