FROM THE ARCHIVE: The last time I shot film

SHOT WITH A NIKON F4 AND A NIKON 500mm 5.6 MIRROR LENS ON FUJICHROME 100: Roger Clemens of the New York Yankees pitches during a game against the Oakland Athletics at the Oakland Coliseum in Oakland, California on May 10, 2003. (Photo by Brad Mangin)

Do you remember the last time you shot film? I am not talking about having fun with a Holga or shooting some fun 2 1/4 black and white to harken back to the old days when photographers had to slow down and think before they pressed the shutter button. I am talking about a PAID assignment for a client who requested that you shoot film. I remember the last time I shot film like it was yesterday, but it was almost nine years ago. Saturday, May 10, 2003 to be exact. Yankees at A’s. 44,486 butts in the seats. Roger Clemens on the mound.

Sports Illustrated was doing a big feature story on Clemens as he was (supposedly) nearing retirement. There is only so much you can do with a pitcher throwing  a ball, so in order to try and get something different my editor asked me to shoot Clemens pitching in this day game in Oakland with a mirror lens. The Nikon 500mm 5.6. I had used mirror lenses before and knew that we needed the cool “donut” effect in the background. In order to make this work you need a park where the fans are close to the ground so their colorful circles fill up most of the background. A park with a high wall down the right field line would not work.

Austin, Texas-based lifestyle, sports and portrait photographer Darren Carroll wrote a great blog post explaining the fun things a mirror lens can do for you a few weeks ago. He gets real hard core and even involves math! He went to Georgetown- I did not. Go read his blog to really learn something. Now back to my story.

This is the last pro pack of Fujichrome I received from Mel Levine back in 2003. It is a little lonely in my freezer. (Photo by Brad Mangin)

All of us Sports Illustrated contributing photographers had to abandon shooting film for deadline stories and start shooting digital in 2003. The Canon 1D was brand new and became the first camera that produced a file that was big enough, and good enough to be used on a regular basis and look OK when printed across two pages in a glossy weekly magazine. I will be honest when I tell you I was freaked out. I loved film, especially chrome. Since I started shooting for the magazine in 1992 it was always so much fun to call up lab manager Mel Levine and ask him to send me a few hundred rolls of Fujichrome RDP (and later Provia). By opening day of the 2003 baseball season I had made the switch and shot my first digital baseball assignment for the magazine on April 5, 2003 (Angels @ A’s). This was going to be hard to get used to! 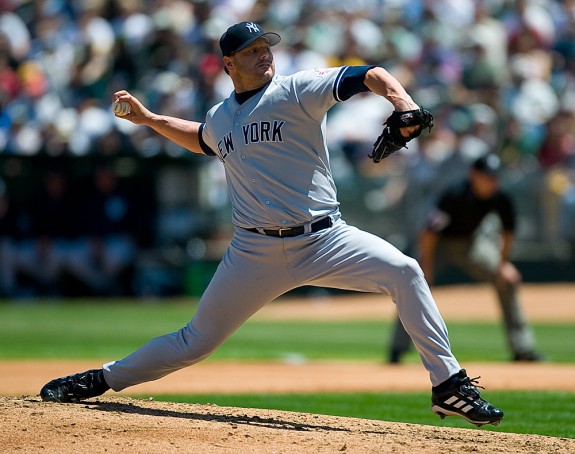 SHOT ON DIGITAL WITH A CANON EOS-1D AND A CANON 400mm 2.8 LENS: Roger Clemens of the New York Yankees pitches during a game against the Oakland Athletics at the Oakland Coliseum in Oakland, California on May 10, 2003. (Photo by Brad Mangin)

I shot a whole bunch of rolls of the Rocket on the chrome with the 500 and also shot some with the Canon digital (see above). I thought the stuff on chrome with the donuts in the background looked cool, but they did not run any of it. They went with stuff of him pitching at home in the pinstripes. They ALWAYS want the pinstripes!

That’s it. The last time I shot film. Period. Makes me sad in a way. Of course today’s digital stuff looks so amazing, and it is so easy to shoot. BUT- there is something about that look you get from film, especially chrome. There is nothing like it. Or should I say, there WAS nothing like it.